Whether you enjoy sipping a smooth golden ale, a refreshing and hoppy IPA or a dark and robust porter, Jackson County’s breweries have you covered.

North Carolina boasts more craft breweries and brewpubs than any other state in the southeast and Jackson County shares the state’s commitment to providing quality local brews.

Head down to Sylva’s Historic Main Street to experience over 100 different brews on tap and the flavors of Sylva’s thriving brewery scene. Along the way, there are great restaurants to grab a bite, antique shops and more.

Check out the Ale Trail’s brand-new map: a field guide to all the stops and our top 10 brews on tap. Use it as your guide to exploring the best craft brews in the North Carolina Mountains. Stop by our Visitor Centers or any of the breweries to pickup your guide to start exploring!

Each craft brewery offers flights (samplings of many beers), pints, growlers and either have food on-site or allow you to bring your own. 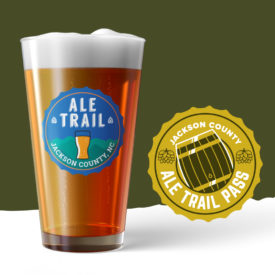 Want a free Ale Trail Pint Glass? Then Check out the Jackson County Ale Trail Pass! Just visit 4 of the participating breweries and check-in while you’re there to receive a limited edition Jackson County pint glass.

Innovation Brewing
The brewery now has 32 brews on tap, a homemade ginger ale and three ciders. A seven-barrel brew house, Innovation has a handful of mainstay traditional ales as well as several IPAs and a number of seasonal and experimental beers for you to try on your brewery tour. “We like to push the envelope by creating fun and unique beer styles using non-traditional beer ingredients such as beets, cilantro, basil and cucumbers to name a few,” said Nicole Dexter, who owns the brewery with her husband Chip. In addition to brews, there are plenty of food choices on site. Brewery patrons can choose from a woodfired pizza kitchen and also the famed Cosmic Carryout Food truck, renowned for their burgers. The brewery is pet and family-friendly. If you’re into sours, check out Innovation’s Dillsboro location which has many added to their lineup in addition to their mainstay brews.

Balsam Falls Brewing Co.
Balsam Falls Brewing features over a dozen beers on tap including a rotating selection of IPAs, pale ales and sours, along with six staple beers regularly on tap. Balsam Falls also has a full kitchen serving up Cali-Mex cuisine. Husband and wife partners in the brewery, Corey and Laurie Bryson, utilize fruits, herbs and even vegetables in their brewing treatments. “Our goal is to have something different on tap every time visitors come in, and we will focus on seasonal pints based on local ingredients,” says Corey. His family grows blueberry bushes, apple trees, cherry trees and grapevines, and those flavors are instilled into the beer. The Brysons even grow several of their own hops that are used in their brews.

Lazy Hiker Taproom – Sylva
The Lazy Hiker Brewing Company is bringing its love of community, the mountains, and beer to Sylva with its latest taproom addition. This taproom offers a wide variety of brews including their flagship mainstays such as Trail Mate Golden Ale and Slack Pack IPA. This new location shares a space with Mad Batter Food and Film where the two businesses collaborate offering excellent brews and food. Indoor and outdoor patio seating and pet friendly.

Innovation Station
Dillsboro is home to Innovation’s second location, Innovation Station, located in a former railroad depot. With 32 taps, they have a number of mainstays from their Sylva location and have an expanded sour program which allows them to offer more sours at both locations. The brewing house, located in a former train depot, serves as a beer aging and pilot batch facility. The brewery is kid and pet-friendly, open seven days a week, and has both covered and open outdoor seating.

Whiteside Brewing Co.
Local brewery located in the heart of Cashiers, NC serving American cuisine and a large selection of both local and house-brewed beers, wine and other fun makers. The perfect spot to bring the family and pups to enjoy the expansive park-like setting and refuel after a day of exploring the best of WNC outdoors. Live music on the weekends and a spacious, relaxed environment perfect for large groups and families.

A tip to enjoy Jackson County’s Brews: List and rank the beers by appearance, aroma, and taste, during your brewery tour, and try a beer that appeals to those senses.

Innovation Cullowhee
Innovation Brewing has added a third location in Jackson County. Located on the Campus of Western Carolina University, Innovation Cullowhee brings its laid back vibes, iconic brews, and a thriving nightlife to WCU. Grab an award-winning pint of Innovation’s mainstays or try something funky and new!