Taste The Brews While Taking In The Views In Jackson County, NC

Just an hour west of Asheville, beer lovers find seven micro-breweries that offer less crowds, innovative flavors and some of the friendliest brewers around. In historic downtown Sylva, the small-town vibe and laid-back atmosphere make sipping suds relaxing, and you’re even likely to chat it up with the head brewers themselves.

The popular Sylva Brew Hop is back for NC Beer Month on April 1 from 3 to 7 p.m.

In honor of NC Beer Month, join City Lights Café, Heinzelmännchen Brewery, Innovation Brewing, Mad Batter Food & Film, Sneak E Squirrel Brewery, and The Cut Cocktail Lounge for the Sylva Brew Hop. In its 2nd year ticket holders will visit each of the establishments and taste 2 local or regional beers. Tickets include a souvenir glass and two pours at each location. We encourage folks to take advantage of our awesome restaurants in Downtown Sylva during and after the Sylva BrewHop. Tickets are $25 per person and can be purchased online: http://citylightscafe.com/sylva-brew-hop.html through March 30, 2017 or at gate on day of event $35 per person. 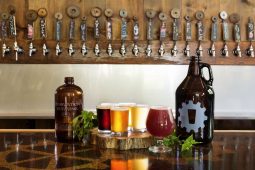 Innovation Brewing is now in its fourth year, and its name is true to its beers, featuring both traditional brews and a number of seasonal and experimental beers. The seven-barrel brew house turns out more than 30 beers on tap, with 12 year-round favorites. Innovation’s Cosmic Carryout food truck is permanently parked at the brewery, serving up a variety of hand-made burgers, veggie burgers and hand-cut fries seven days a week.

Baxley’s Chocolates
628 W Main Street, Sylva
(828) 631-3379
www.baxleyschocolates.com
Baxley’s is offering a special chocolate box for April in which they include chocolates to pair with specific beers. It will include a beer pairing guide which describes the chocolate and tells you which beers go well with it.

Why You Should Visit Jackson County, NC During Secret Season

Your Mountain Home for the Holidays